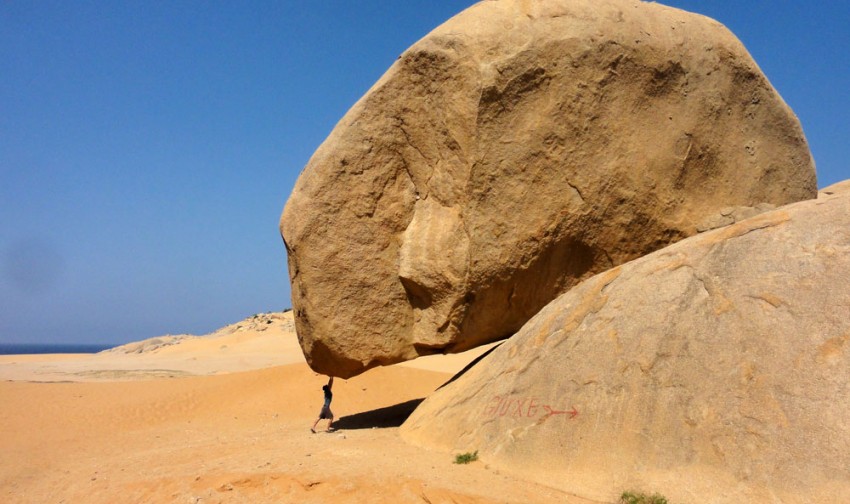 For those who haven’t read the Part 1 yet, it’s not too late, check it out here. Mostly general information about bouldering exploration. In this second part, we’re detailing access and potential of a couple of areas we have scouted during our 12-day trip in the provinces of Khanh Hoa (Dam Mon and Hon Chong), Ninh Thuan (Nui Da Chong, Hang Rai Mui Dinh) and Vung Tau (Long Hai with Vertical Academy).
As we were only two climbers for such a short time, a long distance (200km from Dam Mon to Phan Rang) and a huge wild space, this post is only an introduction about access and potential of some areas we have noticed based on off site research. None of them deserves yet to be called a bouldering paradise, but sharing info gives leads for the next bouldering exploration/scouting trips. Weather-wise, these provinces are warm, especially Ninh Thuan.

We started our trip from Nha Trang, then went in Dalat to participate in the Vietnam Victory Challenge (ultra-trail of 50 km), before coming back to our bouldering quest and heading South to Ninh Thuan province. We finished our trip at the Saigon Bouldering Cup and in Long Hai with a crew from Singapore, Vertical Academy and Asia Outdoors. ☺

Don’t hesitate to give us any feedback or details in case you go in these places to progress in this bouldering quest. It will help the local community to keep scouting areas with potential which deserves further development. Thanks!

a. Access: Dam Mon is located 90 km North of Nha Trang. From Nha Trang, head to Ninh Hoa, Van Gia, then Tu Bong through the QL1A. A few km further, turn South to cross the Hon Gom peninsula with the TL651 to arrive in the cultural village of Dam Mon. There is only one spartian nha nghi (called Hai Ha, no window in the room, a resort is under construction at Son Dung) at the entrance of the village. The boulders are located 3.5 kms from Dam Mon, 300m from the road (West) going to Son Dung. GPS coordinates: 12.64629, 109.41581
b. Potential: in total, we climbed/projected around 15 problems from V0 to V6 during our 2 visits in 2009 and 2016. Mostly vertical and slab profiles, pretty blank. A few cracks.
– The goods: easy to access (300m from the road), good concentration of boulders close to each other with reasonable height, a lot of flat reception (sand), beautiful surroundings. Mostly vertical and slab granite problems with invisible features.
– The bads: the lack of holds/features. As often in Southern Vietnam, most of the superficial granite flakes are sandy, weak and should be cleaned. When it’s done, the boulder is pretty blank!
– Conclusion: the potential in easy and medium grades is limited. Obviously, there is room for a couple of harder problems (V7 and above), especially in slabs and compression. Nevertheless, the overall destination is very nice with pristine beaches, calm and voluptuousness.
Check here for some additional photos and here for a video taken in 2007. a. Access: also called the “Stone Garden”, located 5km North of Nha Trang center. As a “touristic attraction”, there are small entrance fees of USD 1. GPS coordinates: 12.272865, 109.206732
b. Potential: in total, we climbed around 10 problems from V0 to V5 during our 2 visits, we haven’t seen other obvious lines. Vertical and slightly steep granite profiles.
– The goods: very close to Nha Trang center, boulders close to each other of good height, mostly flat (but stone) reception, more solid grips/features than usual for this type of rock in this area.
– The bads: the number of boulders (only 5) and bouldering problems (around 10) make this destination pretty limited in terms of potential. I suppose we climbed in 2007 most of the possible problems, from V0 to V5. There might be one harder problem (V6/V7) on the biggest boulder facing the sea.
– Conclusion: limited but interesting destination if you are there, given the proximity from Nha Trang.
Check here for a video taken in 2007 with some FA and here some photos of repeated problems in 2013 by Vincent.

Only season to go: December to February

a. Access: located inside the city of Phan Rang, on a hill with pagodas. 50 meters from the road. GPS coordinates: 11.592468, 109.031584
b. Potential: we climbed/projected about 4 problems here. There are features but most of the flakes need to be cleaned. A lot of high and huge boulders, but not really climbable, so potential is pretty limited. Ground reception needs to be cleaned as well (roots, rock, trunks). a. Access: Hang Rai is located 30km North from Phan Rang with the TL 702 then turn East where are located some buildings of the Nui Chua national park. GPS coordinates: 11.677075, 109.181943
b. Potential: we climbed/projected about 10 problems there. Nice spot facing the sea. Reception is usually scary with a lot of rocks on the ground. As often near the sea, the few features are weak and need to be cleaned. Some high ball/small cliffs around might deserve some top-rope. a. Access: Mui Dinh is located 25km South of Phan Rang. Cross the bridge An Dong, then follow South the coastline road. Though Mui Dinh is a romantic cove, we found that the most potential area was a few kilometers before, close to a buggy park. GPS coordinates: 11.457060, 108.996782
b. Potential: we climbed/projected about 5 problems there. It’s the most diversified areas we found in terms of profiles (slab, vertical and overhang) with a lot of features (crimps, cracks, even pockets) which were more solid than usual. Reception are not too bad but a saw is requires to cut trunks and roots. Conclusion: there are millions of boulders in Ninh Thuan province, and we only touch a dozens of them. We haven’t found yet an area with a good landing and a great concentration of boulders around V0 to V5. However, we might come back in Mui Dinh if we are around in Winter and keep scouting the hills around. These three areas were the most obvious to scout from Phan Rang, but there are hundred of others waiting for you to be explored!

The day after the Saigon Bouldering Cup, Vertical Academy brought a crew from Singapore, Asia Outdoor and VietClimb to check out the closest bouldering area from Saigon.
a. Access: contact Vertical Academy for more details about access.
b. Potential: 5 problems have been climbed, and a ~V9 has been projected by Gavin! The potential is limited in terms of bouldering but a few sport routes could be developed. Also, there are some other areas which hasn’t been assessed yet, so the distance from Saigon worth other explorations!