Posted by Vietclimb IN / 4 responses 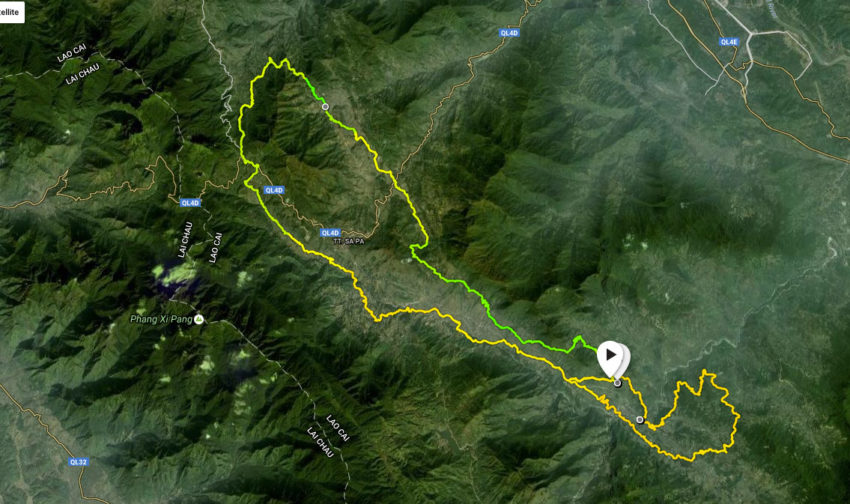 I decided in June to register for the Vietnam Mountain Marathon in Sapa. I hesitated for a few seconds between the 42, 70 and 100km, then signed up for the 100km as it was the first time ever this distance was held in Vietnam. It would be an interesting cross training experience about how rock climbing supplement and improve overall endurance performance and a great coverage for VietClimb. In terms of numbers, the race was planned to be 104km with an elevation gain of 4,300m. As you see on the 104km loop above, it’s like 5 times in distance the round trip route to Phansipan (highest summit of Indochina, West of the map) and almost 200% more of elevation gain. It sounds promising!

We were around 80 runners at the start of the 100km at 11pm on Friday. The plan was to begin with a 30km loop by night before linking the 70km loop. The race started in a great way, I lost for a few seconds my shoes stuck in the mud at the km6, which explains my highest beat rate of the overall race at 161 bpm. I believed a few seconds it was a sign of Gods to tell me to stop, then I promised to properly lace my shoes in the future. Except this incident, all was for the best in the best of all possible worlds until the km 55 where I was ranked around 20th. I was running since almost 10 hours, the arches of my foot were getting stiff. I got slow from km 54 to 62 dreaming about foot massage, then manage to pull myself together from km 63 to 74. From km 75 to 98, megalomanic moments alternated with depression, which was pretty fine as it’s how I’ve been feeling since 5 years as director of VietClimb 😉

I finished the race by night which made my last few km on the last hill of the 21km loop very slow. I should have been smarter to avoid to finish by night and I will definitely consider darkness as a critical cut-off for my next race. I arrived at the finishing line after 20h20 of race and 6,950 burnt calories, with a sentiment of duty done. I’m ranked 23rd over 34 Finishers, almost 50 runners DNF (Did Not Finish) or arrived after the cut-off time.

Training for the 100km For this kind of distance, running is only a small part of the equation which could be divided into the 5 following points:

So you can see that if you’re a serious climber, you’re already at 60% of the required skills (core, upper body strength, proprioception, mental). If you go to the the outdoor climbing crags (Huu Lung, 90km, Haiphong/Cat Ba, 110km, Quoc Oai, 35km) by bike as I do sometimes, you’re already at 80%! Then you just need to figure out what kind of pique-nique and drinks you want during your long journey. You see, you’re almost ready for 100km!

Following this report, I would like to congratulate all the VietClimb members who participated at this event and who flew proudly the flag of rock climbing. Bring it on climbers! Which other sport clubs in Vietnam could pride themselves of having such as rate of participation with consistent results?